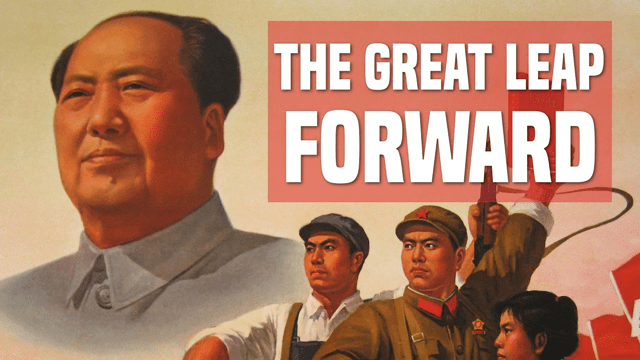 The Great Leap forward can be termed as one of the greatest retrospect incarnate of all times as far as national strategies and policies are concerned. Characterized by visionary oscillations of Mao Zedong, the Chinese leader at the time, the Great Leap Forward intended to surpass the agricultural and Industrial prowess of Britain in a manner similar to what USSR had done, the only difference being that the Chinese timeline was to achieve this in 15 years. Convinced that the Chinese had the willpower and ability to achieve unprecedented industrial growth, Mao identified Agriculture and Industry as the key areas with the potential of fast tracking the economic output of China with more focus accorded to steel production (Chan, 23). The initial plan, set forth in 1957, was characterized by avid planning aimed at creating communes across China as well as establishing steel plants all over the country. The outset plan would see the population living in the rural areas produce sufficient foodstuffs to feed the nation as well as cater for industrialization costs through export. To advance to the modernized world, the plan envisioned the production of sufficient tools for the agricultural ventures. It is important to mention that landowners were forced to surrender their land for purposes of this plan and peasants were forced into working in the communes which also included the army as part of the workforce. In spite of the initial planning adopted in the outset, spites of poor strategy execution and majorly poor planning led to Mao's assertion that the plan could be accomplished within a year, which meant more emphasis on steel production at the expense of Agriculture and this strategy degenerated into the eventual tumbling of the Great Leap Forward and of course to some adverse effects which included the Great Leap Famine. Mao, backed by communist adherents, affirmed his commitment to the GLP in the catchphrase; "it is possible to accomplish any task whatsoever."

The history of The Great Leap Forward

In the offsetting period - 1957-1958 communes were formed with tremendous success (Mackerras, 12). The population in the communes considerably varied and ownership of tools, animals and farms was given up to for use in the communes. Institutions, like schools and day care centers for children, were incorporated into the communes as well as facilities for the ageing. The commune guaranteed access to all that was needed ranging from food, daycare for the children and the elderly as well as the provision of security to the households within. The strategy was to have the people have sufficient time to deal with the production plants, water conservation utilities as well as basic infrastructure like roads and power source plants. Towards agriculture and industry, quotas were established on crop and steel production. Close planting was also initiated to increase the agricultural output and escalate it to portions capable of being exported for earning of foreign currency. Rice fields were deepened so as to increase the output of the crop. The women were allotted duties in the fields whilst the men had to be engaged in steel production as well as other factory duties. "Back-yard" production plants mostly furnaces were established to provide sufficient tools for the communes. Fully functional "back-yard" furnaces had the ability to provide high supplies of steel, and it is estimated that around 11 million tones could be produced annually through these furnaces (Chan, 28).

The return from this major investment was a huge rise in the production of timber, steel, coal, chemicals, cement among other important products essential for the growth of the economy. Although the digits were not impressive in the beginning, when the plan was in pace even the agricultural field posted commendable results with grain and cotton, as well as rice posting good yields. Despite the tremendous success achieved in the first year, several factors contributed to the downfall of this plan. To begin with, the quality of steel produced was of poor quality. This can be attributed to the rush in which it was produced as well as the factory quality. This meant that the steel could not fetch the desired amounts of money in the market and it could not produce quality tools for use in the farms. The poor quality of the steel was precipitated by the lack of sufficient exposure to heat or failure to maintain the constant temperatures. This meant that even the kitchen goods made were susceptible to melting down. Some of these factories simply failed to use the best steel or the pure iron necessary for the attainment of quality. With regards to agriculture and industry, the technology and means adopted were faulty. The deep rice fields encouraged the tall growth of rice which meant that wind would break it. This led to the fall of rice production. The communes encouraged competition in which targets were not only to be met but also to be beaten. The lack of machinery precipitated the use of bare hands which in tandem meant that the work was more tiring and the eventual result was poor quality work. Buoyed by the prospects of being victors, the competition led to the reporting of exaggerated figures of agricultural output which translated to the export of what was considered surplus whilst in reality the figures were flawed. There was a general lack of training on the duties assigned to the persons (Mackerras, 10). Finally, the communal dining project was difficult to sustain due to the lack of sufficient food. Ideologically, though the venture seemed noble, its critics of the government policy had tremendous success through propaganda. The provision of public address systems to the work sites meant that the people were enlightened and began questioning the ideals of the Great Leap Forward.

In 1959, what began as a noble idea, praised and adhered to nationwide went haywire. Farcical political ideals and decisions founded on individual desires replaced the logically outlined course of action. The notion that the entire plan could be executed within a shorter timeline led to Communist Party officials ordering for the impossible whilst the commune leaders had no option but to try to deliver. Those who complained of the extra force were charged with sabotage and were executed alongside those who questioned the ideals behind the Great Leap Forward. The quickly produced machinery fell apart when used. The long and tiring working hours led to a tired and exhausted workforce whilst the buildings constructed using substandard steel collapsed. At this time, the farm workforce had been pulled out of their farms to concentrate on the backyard construction, meaning that agricultural production had dimmed. The food that desperately needed to be harvested was left to rot away in the fields. The poor growing year of 1959 meant that sufficient planting could not be done and a drought ensued which is estimated to have caused the death of approximately 20 million people (Chan, 38). The rail system which was dependent of coal was replenished as supply had been directed to the backyard furnace. Based on this sudden downturn of events, Mao accepted responsibility for the situation and whilst blaming himself for the widespread chaos, he advised that other party members were not as clean and thus they should equally be responsible for their role. His popularity with the people didn't help matters and in the lose of credibility, he resigned from his position but retained the powerful party leadership as chairman. The country was left in the hands of the moderate Liu Shaoqi, Zhou Enlai and Deng Xiaoping, who later reinstated land ownership as well as reduced numbers of communes for manageability. In 1961, the Great Leap Forward, which had precipitated adverse effects in the Great Leap Famine, was abandoned altogether (Mackerras, 12). To conclude, though USSR had undergone the same transformational program, it did not support the hastily formulated Great Leap Forward Policy. When the government went ahead, the USSR, a practicing communist state at the time, had no option but to dissociate itself with China. Thus the Great Leap Forward orchestrated a split between China and USSR.